SUMMARY
• Enforcement activity and fines were substantially lower than in previous years.
• The European Commission completed two investigations comprising three cartel infringements.
• Aggregate fines of €279 million were imposed.
• Without leniency and settlement discounts the fines would have been about €654 million i.e., 2.4 times larger than the fines paid.
• The Commission issued one Statement of Objections and re-adopted one decision which substantially reduced the fine due to its procedural failure to take account of the addressee’s inability to pay.

This is Case Associate’s Annual Review of the European Commission’s administrative fines imposed on cartels in 2020.

The two settlement decisions were announced through press releases.
Together 7 undertakings were fined €278 million, with the Commission commuting €375 million in fines under its leniency and settlement procedures before any appeals (Table 1 and Table A list the fines by infringement and addressees respectively).

In the absence of leniency and settlement discounts, the fines would have been around €654 million. 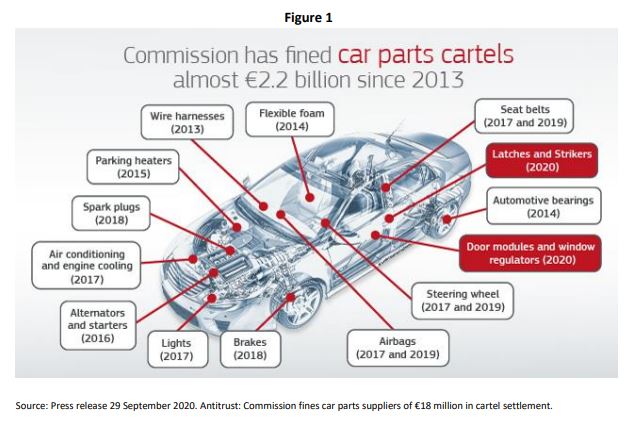 To adjust the number of undertakings involved and the duration of their infringements the fineper-cartel-year has been calculated. This is the fine divided by the total number of years the firms’ participated in the cartel as shown in the last column of Table 1. The average fine per cartel year was nearly €14 million. This varied from €12 million to €2-€3 million for undertakings participating in the Ethylene and Closure systems cartels, respectively.

The duration of the cartels varied with Ethylene operating for five years, and the two infringements of Closure systems for half and nearly three years, respectively.

Leniency and Settlements
Both infringements were detected by a full leniency applicant. These whistle-blowers avoided fines of €190 million (Westlake) and €6 million (Magna).

All other undertakings received leniency discounts of between 10% and 50% which reduced total fines by a further €133 million.

In total, the leniency programme ‘saved’ cartelists, or ‘cost’ the Commission, €329 million in commuted fines to expedite the Commission’s investigations and to secure a successful prosecution.

These reductions in the nominal fines calculated under the 2006 Guidelines on fines1 were more than the fines imposed by the Commission.

All two settlements led to a further 10% or €46 million reductions in fines.

The two decisions bring to 34 the number of settlements concluded by the Commission since the procedure was first used in 2010.

Comparisons with the previous year
A comparison of total annual fines, the average fine per undertaking, and the number of undertakings (in brackets) since 2010 are shown in Figure 2.

The total fines and the number of undertakings prosecuted were significantly lower than in previous years. Total fines were the lowest for the decade.

The average fine per undertaking was however the second highest for the decade at €40 million (Figure 2).

The average fine-per-cartel-year fell significantly from €27 million in 2019 to €14 million.

Readoptions
The Commission re-adopted its decision against the CCPL Group entities reducing their fines from €33.7 million to €9.44 million for their involvement in three separate cartels in Retail Food Packaging. This followed the July 2019, decision of the General Court (Case T-522/15) which
annulled the fines because the Commission failed to properly take account of the undertakings’ inability to pay under point 35 of the Guidelines on Fines.

In the pipeline
The Commission issued one Statement of Objections to Conserve Italia for its participation in the Canned vegetables cartel under to standard cartel procedure. Conserve Italia refused to participate in the €31.6 million settlement decision adopted in September 2019 against Bonduelle, Coroos, and Groupe CECAB for their 13 years of participation in fixing the selling prices of canned vegetables to retailers and/or food service companies.
Table 2 lists the investigations in the pipeline together with the stages reached to date based on the public statements of the Commission.

No full or summary prohibition or settlement decisions for previous years’ infringements were published.