The European Court of Auditors’ (ECA) report The Commission’s EU merger control and antitrust proceedings: A need to scale up market oversight is its first audit of DG COMP’s enforcement activities. It found that the ‘commission made good use of its enforcement powers’ within its ‘limited budget’ but as the report’s subtitle suggests ‘it needed to scale up its market oversight’. It recommends more proactive enforcement, monitoring, prioritising, and ex post evaluations, better coordination with national competition authorities, and increased resources devoted to detection.
I will show that while the ECA’s recommendations are welcome, the audit fails to shed much light on key issues (e.g., why it takes so long to investigate infringements; Why leniency has not reduced the length of investigations; Why leniency applications have declined) and its key recommendation that DG COMP increases its detection activities may backfire. Here I focus on the antitrust sections of the report.

Summary of Key Facts
The ECA’s report is mainly a discussion of trends in DG COMP’s enforcement activities over the last decade (2010-2019). Most of these are known and have been extensively discussed elsewhere.
The audit shows that DG COMP operated over the decade with reduced staff and ‘limited budget’ yet was able to maintain its antitrust caseload even though resources were siphoned off to its merger unit. It investigated very few of the cases reported to it, and its caseload was dwarfed by those of the national competition authorities.
DG COMP relied heavily on its leniency programme – over the period 2010 2017, 23 of the 25 cartels it prosecuted were initiated by a whistleblower. There was little and declining ‘own-initiated detection’ of offences. The number of leniency cases registered after 2015 had declined (see Figure 4 – no vertical scale as in original) which neither the DG COMP nor ECA could explain.
DG COMP’s investigations were said to ‘remain lengthy’. It took an average of 4 years to investigate an antitrust infringement and longer for cartels. Some of the delays were due to those investigated stringing out the process by tardy responses and appeals, and leniency was said to prolong investigations. But there is no analysis of why cases took so long.
DG COMP imposed fines of over €28 billion mostly on cartels but since 2015 the bulk came from Big Tech breaches of Article 102 TFEU. Two-thirds of the fines were less than 1% of the addressee’s annual worldwide turnover, which was far less than the 10% cap.
DG COMP’s prohibition decisions were routinely appealed although this declined significantly after 2015. The Commission won over 80% to 90% of these annually. 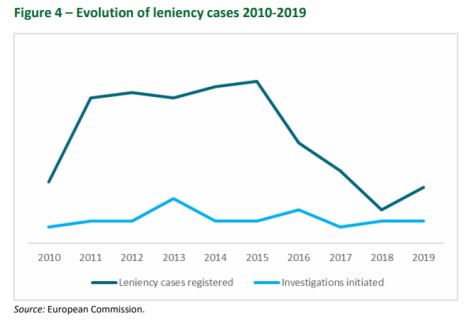 According to the ECA DG COMP did not report its activities fully, focused on enforcement inputs rather than outcomes, and did not have a framework for prioritizing its activities. There was a need for greater transparency and ex post monitoring to determine the effectiveness of its enforcement efforts. It ‘had not performed any overall evaluation of the deterrence effect of its fines’ and its ‘finesetting methodology did not take into account the probability of detection.’

Commentary
While the need to monitor, evaluate, and prioritise enforcement goes without saying the ECA’s assessment is in key areas incomplete and superficial. Its major flaw was the failure to model the budgetary and institutional constraints faced by DG COMP that would explain its enforcement approach.
I suggest that DG COMP’s enforcement strategy can be viewed as ‘efficient’ in the technically neutral sense that it is maximising outputs subject to the budgetary and institutional constraints it faces (rather than in the consumer welfare sense). Let me explain. DG Comp has a limited budget, a set of enforcement instruments with associated costs and effects, and the need to comply with the law within which it must maximize its enforcement impact. An ‘efficient’ regulator would select those enforcement instruments and sanctions which maximized its impact. The high fines, reliance on the object provision of Art. 101 TFEU to prosecute cartels, leniency, and the minimal ‘own-initiated detections’ all point to maximizing behaviour within DG COMP’s ‘limited budget’.
Take, first, the reliance on high fines. An enforcement agency can save enforcement resources by raising fines and reducing the detection rate because imposing fines does not consume much agency resources. This also acts to increase the deterrent effect.
The use of the ‘object’ rather ‘effect’ limb of Article 101(1) TFEU avoids the evidential costs of proving harm to competition. It increases the conviction rate and hence the deterrent effect.
Thirdly, the leniency programme increases the detection rate and conserves investigation costs. This potentially has an ambiguous effect on deterrence as the lower fines given to leniency applicants reduce the expected penalty if not more than offset by an increase in the detection rate. Indeed, the Commission has been accused of ‘leniency inflation’ by giving more generous reductions in the fines in recent years. But here one needs to dig a bit deeper. While in practice the DG COMP typically halves the notional pre-leniency aggregate fines under the 2006 Guidelines on Fines, it may have set these higher to offset the leniency discounts. This interpretation is not inconsistent with the increase in post-leniency fines with the greater use of leniency. If correct this means that the detection rate and deterrent effect have been enhanced while conserving enforcement resources.
The ECA notes that the Commission’s fines are among the highest in the world but says that DG COMP has not assessed how they relate to offenders’ illicit profits. While the Commission may not have researched these others have. These studies show that on average the fines exceed reasonable estimates of cartel offenders’ excess profits. There is also statistical evidence that the Commission’s investigations have caused a permanent fall in the share prices of publicly listed firms by more than the amount of the fines levied. The explanation is that the Commission’s actions terminated otherwise profitable anti-competitive practices and caused significant reputational damage. This suggests that greater transparency and more publicity surrounding the Commission’s enforcement actions can increase deterrence without raising the detection rate.
This brings us to the question of how to measure the deterrent effect of the Commission’s high fines. This is a complex matter which is hard to do. We are here dealing with the counterfactual – what has not happened – which is always going to be hard to establish. The ECA offers no suggestions on how this can be done. Again, academic research is beginning to tackle the question suggesting that anti-cartel laws do have a deterrent effect, but this may not be mainly due to fines. More research is required.

Budgetary Issues
Surprisingly, the ECA said nothing about DG COMP’s ‘limited budget’. Instead, it offered platitudes – the budget reflects Commission priorities which balance the demands of other DGs. But we can deduce from the decline in staff ‘posts’ from 830 to 804 that DG COMP’s budget has declined in real terms.
What the ‘audit’ does not develop isthat DG COMP’s activities are hugely profitable. It does not consume taxpayers’ money but generates large surplus revenues. The fines it imposes run to around €3 billion each year, its budget to tens of millions of euros. The fines are paid into the Commission’s coffers and spent elsewhere. Whether starving DG COMP of funds (it generated) to defray expenditure elsewhere represents value for money is not discussed. What is clear is that if DG COMP were given even a small share of the fines, then it could easily increase its ‘own-initiated detection’.

Pay up to ‘scale up’
I have argued that DG COMP’s enforcement activities are a rational response to the budgetary and institutional constraints it faces and that it has developed resource saving interventions to increase the detection rate. Whether it does this in a super efficient manner should have been investigated but was not. So, the ECA’s admonition that DG COMP ‘scale up’ and its key recommendation that it ‘increase the probability of detecting infringements’ which would be costly should have been accompanied by recommendations for the Commission to pay up, and a critical analysis of how the appeal process, private actions, leniency, and offenders game the system affects DG COMP’s operational efficiency and deterrent effect.